It is sweet in the middle.
That's the way
Kakdah describes the recent harvest of tomato.


Three plants to start with,  one  died of wilting within the first month, the other died also of wilting with tomato already formed. Only one survived to the end. And this is the first harvest of six tomato. I am expecting another harvest within a week or two. The ripest tasted quite sweet kakdah said.....

Email ThisBlogThis!Share to TwitterShare to FacebookShare to Pinterest
Labels: tomato

Eight o'clock in the morning  is rather early for serious things.
But that is the only  time I have
to take pictures for the day.
Somehow early morning has some effect
on density and mode of colours.
Like babies after a long sound sleep.
It's sweet and bright!!

Email ThisBlogThis!Share to TwitterShare to FacebookShare to Pinterest
Labels: hibiscus

growing pineapples not a thorny issue.

This is our best effort so far with pineapples. Twelve pineapples madu and 10 pineapples mutiara variety. Razak  managed to get pineapple seedlings from Pontian, free of charge he said. The little ones, madu variety seems to keep adding leaves, while the longer and bigger mutiara variety stay steady, getting taller and bigger, but strikingly lack the bushy look.
﻿
﻿


Pineapples are said to originate from South America,
and later spread to all part of the world through
colonisations, voyages and trades.

﻿
﻿
﻿Faizal, kakdah's brother who is involved in pineapples industry in Perak, mentioned about pineapples needing a full year for harvest. But with hormones or something, the process can be quickened. I think I am going to let the pineapples grow as they like, keep putting fertiliser and water and lets see when will they decide to bear fruits. No hormones no inducers....

Email ThisBlogThis!Share to TwitterShare to FacebookShare to Pinterest
Labels: pineapple

Roselle beyond juice and jam.

An email from Mr Ng caught me by surprise. Mr Ng, one of the food processing research group from local university nearby, is looking for a few kilos of  fresh roselle supply for research.  It's interesting to know how blogging connects people well, gardener and researchers. I know Andrea from the Philippines is a horticulturist and now is Mr Ng a food processing researcher. Last year a group of students from University Kelantan Malaysia came to our house in Tanah Merah for roselle seedlings for their entrepreneurial program. So, gardening world is not limited to relationship between man and plant but between man and man also. 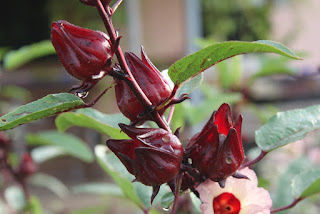 Ng mentioned about roselle having anthocyanin , being one of the most beneficial content in roselle. The research team is currently looking into the preservation of anthocyanin after going through drying process. They are comparing the sterilisation effect between common drying methods and their new technique. Tengku Nadzion who is currently involved with 2000 cili project will look into it, and embark on strategic collaboration that will benefit both parties. In the meantime Suzana who is steering the overall entrepreneurial programs will not miss the opportunity of bringing up programs beyond the basics. I hope Bakar will take his team and serat nenas project or pina in Philippines around the whole spectrum:- cultivation, production, marketing, fiber extraction, clothes, souvenir items etc that will eventually benefit the whole community of Pontian.


roselle flower
The fruits are undoubtedly benefitial to us, but the flowers are equally good
so beautiful, pinkish creamy colour that will sooths tired eyes﻿.
And the flowers are good from any angle.
﻿
﻿﻿
﻿﻿
﻿

Roselle growing at the backyard of our house, will soon find it's way to the food processing research center in a nearby university. I am happy to see home gardening evolves into the depth of academia that will benefit mankind in many ways.
The future of roselle
We germinated a lot of roselles recently, now in black polybags. It's about 100. They would be used as the next batch to replace the current ones, and some would be issued out as giveaways .


roselle has every potential
to brighten up anybody's garden. the flowers are beautiful,
and the fruits are tasty as juice and jam.

GROWING CHILI on a large scale.

It's a large scale farming adventure, of 4000 chili kulai and solok variety at Lubok Joh, labok Kelantan. It's a primarily an entrepreneurial endeavor on a rented 2 acre plot. Selected youths took part under the supervision of an experienced farmer Wan Azua. The project was initiated middle of last year, as we were busy with rooftop gardening  in Tanah Merah Kelantan. The project was rolled out in October last year towards the end of my stay in Kelantan, and five months later it is showing clear sign of success.The final success of this project hinged on the number of entrepreneurs that can be developed. And we also try to devise a mechanism that the project benefits community in a lot of ways.
I was invited to the harvest festival.
Both of us turned up, myself and Kakdah.
It was both satisfying and fun. 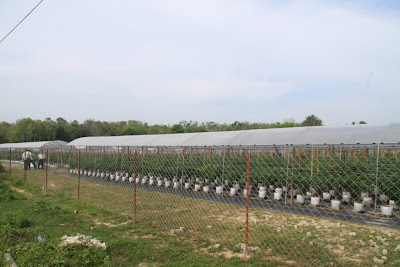 it's a rain free environment,
with clear plastic sheet as roof
Kakdah was discussing with Wan Azua.
We know him quite well.
He is a computer expert, graduated from US,
worked for 5 years with international company as an engineer,
then quit to be a full time farmer. 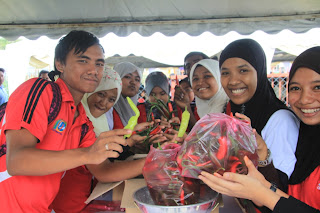 the young entrepreneurs
learning the trick of marketing.
They will soon understand that farming is not only about toiling with soil,
in fact it ends with how much can be sold. 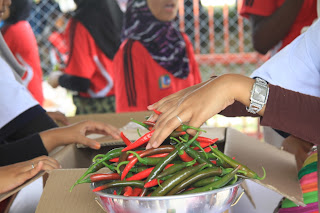 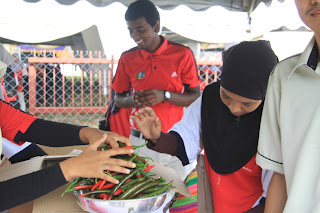 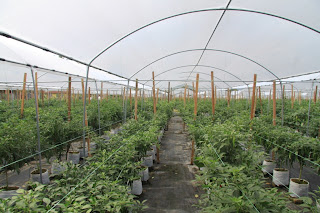 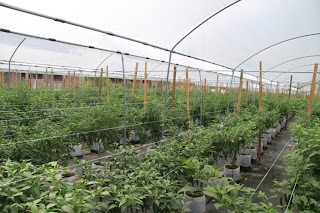 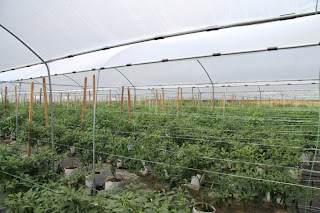 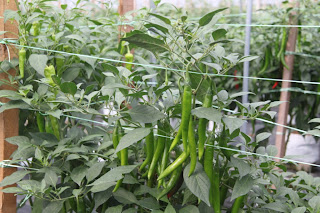 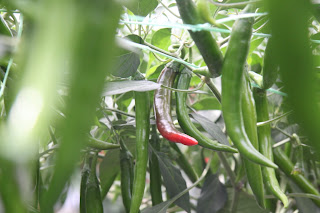 one red chili out of many 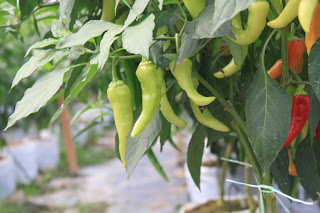 this is chili solok,
a variety which is very popular in Kelantan 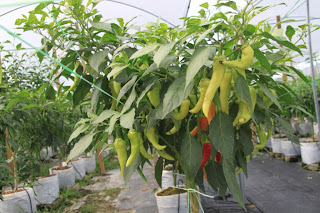 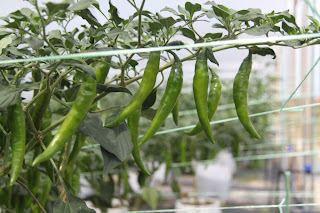 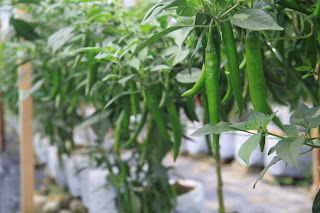 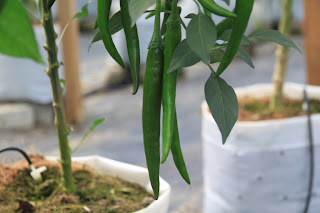 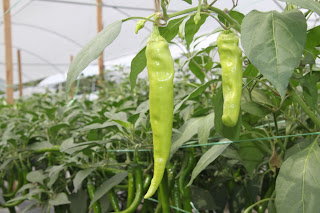 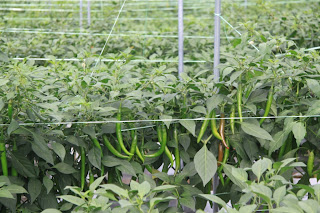 a speech by Wan Zul 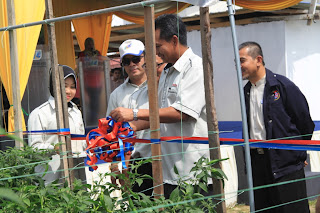 The produce is 2000 kilo for the first month, it is expected to increase reaching the peak in May to almost 4000 kilo a month. When monsoon comes later in the year, they will reap maximum profit, as price may easily double, and most open farming would succumb to rain badly....

We took home 5 kilos of lada solok and 15 kilos of chili kulai. I am happy to see the farming project going on well and bear fruits. I am sure it will create ripples and benefit the whole community in a big way. Such project has a glimpse of "dare to dream" element in it. Over here in Johor, we will embark on similar project on 2000 chili as starter which will later evolve into large scale farming on a 10 acre plot next year. Our associate Tengku Nadzion will be heading the project. I wish Tengku Nadzion and his team GOOD LUCK on  a noble and very enterprising endeavor of 2000 chili centil. Planting will be done end of March.

I had two rows of kale growing. They were doing fine without any real sign of pest bites. I had a choice, taking one or two plants as necessary for Kakdah's menu, or pull out all of them. Then we decided to pull out all, and shared with neighbours. The closest neighbours are Sharifah, Laili and Mumtaz, each got their share... Kakdah wrapped them with old newspaper and distributed them. She joked with Laili "Akak jual kailan ari ni...."


Our little garden somehow evolves
into an interesting social focal point
around the neighbourhood.
It's kale now,
and something else next week
bangchik and kakdah
johor
at 3/19/2012 11 comments:

putting colours to the garden.

Hibiscus is the earliest to be planted, with the rest of vegetables late last year. It somehow adds colour to the garden. The flower is creamy  with red in the middle. There bound to be one or two flowers blooming everyday. That will attract kakdah attention as she ventures into our vegetable garden or as she walks up to the cloth lines situated at the far end.


hibiscus
sweetcorn
Although there isn't much colour to look at, I do find it intriguing how the cornsilk (hairs at the top of corns) change colour, from white to brown as it gets older. Humans do the reverse, grey hair towards the end.......

marigold
I have been delaying putting seedlings into the garden. To start with, marigolds don't attract Kakdah attention as much as roses.  I have to decide myself where to put, since marigolds are not in kakdah's list of treasured items. Finally the matured seedlings end up in a row by the edge of our large vegetable bed. The stakes are for protection, not against animals, but our grasscutter!!

I will keep adding colours to the garden,
to lure Kakdah more often
through rows of vegetable beds.