Weather has mind of it's own which work on a system  we have no real control. Temperature, humidity, atmospheric pressure, wind, and rainfall are the parameters that weather would play around. So yesterday, weather decided to pour rain over Pasir Gudang. It wasn't the heaviest of rainfall, but it helped filling up spaces between soil particles which had been empty and dry for almost three weeks. Earthworms would find their tunnel a lot smoother to slide through. Roots would  absorb the much needed source of life into their system, and leaves would paint themselves greener to trigger off heavier photosynthesis. Frogs would croak, serenading the cooler days ahead. Birds in the morning would flutter for long awaited feather-do cum shampoo.

It was Monday 6th of August 2012, that we plucked a ripe markisa / passionfruit.  Yesterday which was a week later, the fruit didn't change much, probably a shade darker. 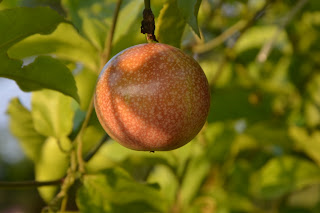 
The scooped content of markisa was added with water, stirred and strained.  A little bit of sugar and ice cubes were added to bring about another tropical juice. The fragrance is paradise.

periwinkle, the softest of pink.

Periwinkles grow at different places in our garden, Some are grown in the ground and some in pots. This particular periwinkle is special because it's colour is the softest of pink...

They were doing landscape facelift further up the road, which included removing 3 clusters of yellow bamboo. I asked them to bring those bamboo to my place instead of throwing somewhere.  The bamboo are long, not bothering to cut them to shorter length I just stake them as trellis. They really look very tall and I think zehneria or timun tikus (seeds from Cambodia) would find the height very enticing.  Zehneria are known to grow to a height of 15 feet.

Ripening is a process in fruits that causes them to become more palatable. In general, a fruit becomes sweeter, less green, and softer as it ripens. Even though the acidity of fruit increases as it ripens, the higher acidity level does not make the fruit seem tarter, which can lead to the misunderstanding that the riper the fruit the sweeter. This is attributed to the Brix-Acid Ratio. (wikipedia)


I finally plucked it early in the morning of Monday,  6th of August 2012. We are not going to consume it yet, but to let it complete it's ripening process on the table, to ensure seeds will attain maturity for better chances of germination.

Email ThisBlogThis!Share to TwitterShare to FacebookShare to Pinterest
Labels: markisa

Growing markisa is fun in itself.  We can never miss the sight of tendrils. These are little fingers of markisa. They grab on objects , circle and hold. To allow sway or movements either imposed by the weight of fruits or the gust of strong winds, tendrils has springs. They are very flexible.


whenever it can get hold of objects, tendril will wind itself into little spring.

Email ThisBlogThis!Share to TwitterShare to FacebookShare to Pinterest
Labels: markisa

a sweet memory of the recent past.


The photos were taken during the last rainfall. It had already been more than a week without rain now, it's definitely getting hotter and drier.  Kakdah was down for two days with fever. The plants are yellowing with thirst. I am displaying sweet memories of the last rainfall here....

sweet memory of the recent past, a rainfall

To start with I didn't do much to soil. I dug shallow about six inches, deep enough to put in the vines. I am not too worried since the vines had been in black polybag for almost six months, and they should be strong  to push out roots. Cloth lines become trellis, four green coated wires connecting both ends should be ok for the the vines to crawl and for tendrils to circle and grip.

Three vines on the left pole and only one on the right. So midway along the green wire should be their boundary.  So when the time comes for pruning, the vines would be cut back a yard or two before the midway. No pruning yet so far.

What can we say, since flowers look so exotic half through full bloom, and fruits dangling down look like real tropical paradise.


We had taken 3 fruits so far and
we are waiting for the next one to turn yellowish.....