MULBERRY, not enough for everyone.

A friend commented about balanced diet recently.  He said we were designed to withstand the worst situation on food we take. In the early days of human existence, he imagined that food wasn't very regular, men would go out hunting animals and collecting edible fruits and shoots on the way home.  People would eat later half of the day, probably only once a day.  Food would be varied according to what they managed to bring back home.  No standard daily menu.

Once men settle down, no more nomadic hunters,  there would be chickens, goats, cattle, fruit trees and vegetables around the homes. Then food became regular and of standard menu.

I was looking at my only mulberry tree grown in a pot. It has been with us for almost 10 years.  I wonder if glimpses of early days of human existence is coming up. One mulberry tree, potted to make it even worse,  cant be enough for everyone.

Wani and Arif came last month, and they had a bite at these mulberries.  I promised them mulberry jam next year. I need to grow more mulberry plants! 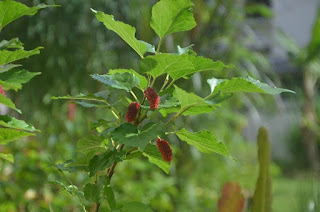 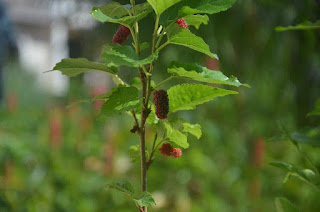 Email ThisBlogThis!Share to TwitterShare to FacebookShare to Pinterest
Labels: mulberry