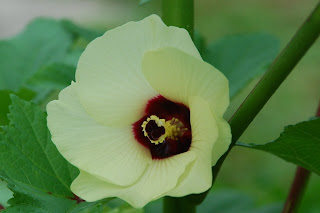 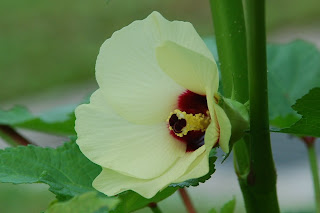 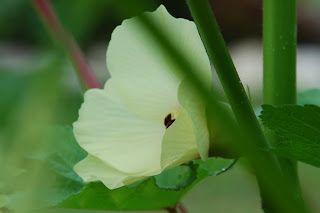 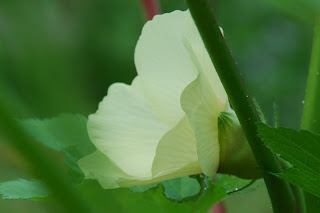 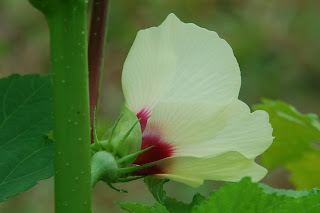 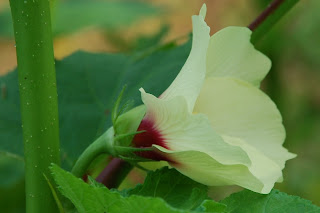 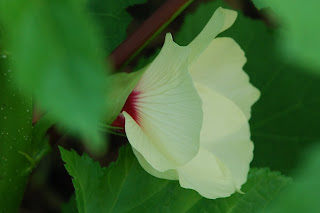 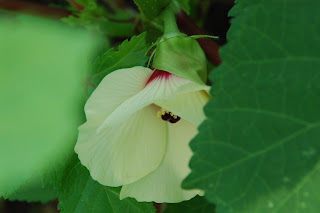 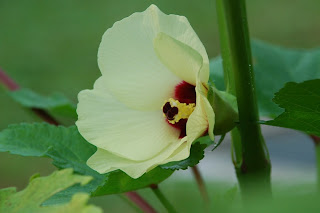 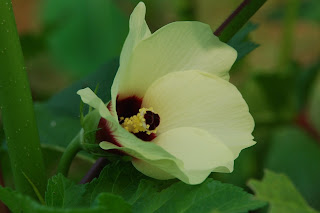 Okra or Lady's finger
the first flower.
pic 10
The first flower appears from one of the six lady's fingers on the vegetable bed. The flower is pale yellow in colour, funnel shaped and resembled hibiscus flowers with the throat of the flower in heavy  maroon. It rivals the orchids in beauty. The scientific name is Abelmoschus esculentus . Also known as Okra, or kacang bendi or kacang lendir.
How would we describe a flower and its beauty?

. Published 1912
Explanation Of Terms Used In Describing Flowers
Every perfect flower contains four sets of organs, arranged in circles at the top of the flower stem or axis. At the center a pistil stands. Often there are several pistils. This organ consists of three parts, ovary, style, and stigma. The ovary is a small sac at the base of the pistil in which ovules grow, (rudimentary seeds). The style is a slender, hollow tube connecting the ovary with the stigma, and it may be absent without impairing the pistil. The stigma is a knob or head, sticky and porous, at the tip of the pistil.
Stamens surround the pistil in one or more circles. There are two parts to a stamen, the anther, and its stalk or filament. The anther is a double sac (generally) in which pollen grains are borne, kept while they are growing, and set free by some sort of an opening, as a slit or chink, when they are mature. A pollen grain is conducted to a stigma by an insect or in some other way, falls upon the rough, porous surface of that organ, is nourished by it, grows, sends a branchlet, a tiny thread, down the style into the ovary where the ovules lie. By changes in structure the ovules are converted into true seeds which are for the propagation of the plant.
These are the essential organs of a flower, and no seed can be produced without their union with one another.
The floral envelope surrounds these essential organs, consisting of corolla and calyx. The separate divisions of a corolla are petals, and of the calyx are sepals. The petals make the color and beauty of most flowers, while the sepals are generally green. All these organs are collected upon a receptacle.
The stalk which supports a flower is called a peduncle. The stalk which carries one of a cluster of flowers is a pedicel. A pedicel is a secondary peduncle. When the flower stalk springs directly from the root and bears no leaves, we speak of it as a scape.
The way in which flowers are arranged upon the stem, whether singly, in clusters, elongated spikes, close heads, etc., is spoken of as inflorescence. A clustered inflorescence is of advantage to flowers which depend upon insects for pollination, as they thus appear larger, show more color, and can be seen from a greater distance than if single. These clusters are called spikes or racemes if elongated, corymbs if flattened, heads if rounded like the clover blossom, umbels if like the wild carrot.
Two other forms of inflorescence should be mentioned, the spadix and catkin. The spadix is an elongated, fleshy axis upon which small flowers are borne, and it is often covered by a spathe, a green or colored leaf hanging over the spadix. The Jack-in-the-pulpit and Calla lily are examples of this kind of inflorescence. Often the stamens and pistils grow in different parts of the spadix, above or below.
A catkin, like that of the willow or birch, is a spike of flowers in which each is accompanied by a little, dry sort of scale. In many trees and shrubs, staminate and pistillate flowers occur in different catkins which look quite unlike one another.
An involucre is one or more circles of bracts, often colored and looking like petals, surrounding a head of flowers. The white, showy leaves of the flowering dogwood blossom are the involucre belonging to the small, dull flowers within.  Click here: Terms Used In Describing Flowers, Plants

click here:  Image results for cross section of a flower