Chili plants are flowering,
with the first fruit already out.
and everything is going on well,
set for the first harvest
next month. 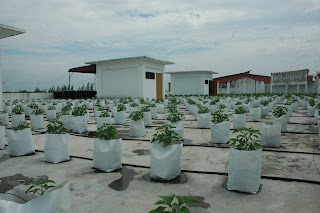 They set up a small clinic to handle infested plants. Not many are affected, 3 out of 800 should be considered negligible by normal farming practice.  Two plants were affected by "kutu terip" and had recuperated well after proper medication. Another one was affected by little bugs ~ brownish in colour, when pressed green juice came out from their little bodies.  Nazri will take the sample to the expert soon.
Izmar ( Hydro Garden), the counterpart from Kuantan came last week. He gave a "thumbs up" seeing how the whole rooftop gardening gearing up, after spending two hours checking the plants.
Today, Tokgawa Adnan and Arief came to view things as a prelude on the scheduled harvesting ceremony to be officiated by the local minister TokPa around third week of July. The crowd for that day is expected to be about 1000.  To spice up the harvesting ceremony, many activities are planned; colouring competition on chili plants for the kindergarden kids, essay competition on "green" for secondary school students in Kelantan, photo competition on "green" for students of higher learning institutions nationwide,
and not forgetting vegetable and fruits basket arrangements for the ladies.
A group is looking into media blitz with TV ,
radio and newspaper as a run-up.
Rooftop gardening requires some kind of  exposure to be accepted in Malaysia.
bangchik and kakdah, Tanah Merah Kelantan.
at 6/15/2011