Fertigation / Fertigasi; getting a feel.

To fertigate is to fertilise and irrigate at the same time, by adding fertilisers to the water supply. ( FERTilise + irrIGATE ~ a way to put some sense to the word). In commercial agriculture, fertigation is in wide use, and the concept began to spread to residential landscaping and hobby gardening in the early 2000s.
The sight of plants house with clear plastic sheet at the top is becoming very common in Malaysia. Some cover acres, some are small, household version. We made a trip to  Anuar's MCG Fertigation Gelong Gajah, near Wakaf Bata, 5 minutes from home, to see and get the feel.... 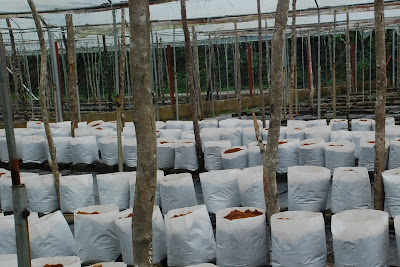 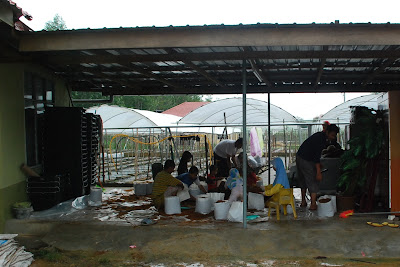 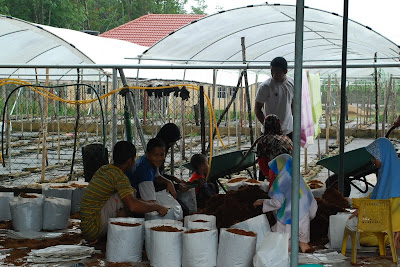 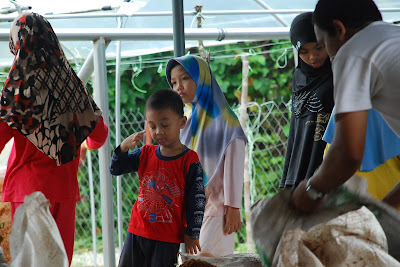 they were taking a break, waiting for new supply of coco peat. 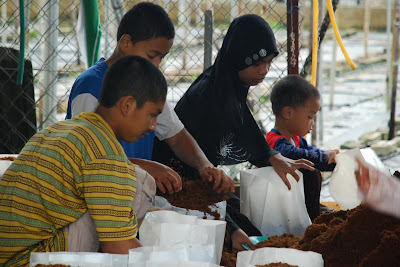 they were busy again filling up bags with coco peat 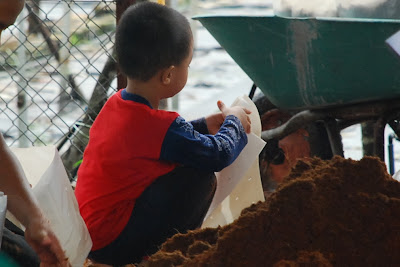 his youngest son, very absorbed with what he was doing.
I think he was trying to open up the poly bag.
We sometimes face the same problem
with plastic bag at home.
We arrived around 10am. His children and friends were busy filling up bags with coco peat. He said, the kids enjoyed doing this over weekends. Then the day will end with a trip to Kota Bharu to eat and shop with their well earned extra pocket money. It is good to get children involved and build up their understanding and commitment on business their parents are involved. Then continuity will come in nicely as parents get older.
We talked about fertigation which has been his bread and butter over 5 years. The wife served tea and slices of rock melon. That was the crop they grew recently, just harvested.  Coco peat may last for a year, then it will be replaced with fresh material. Soil is the growing media traditionally, but with fertigation technique, they use coco peat. He used to get supply of coco peat from Sabak Bernam, now he gets it from Bachok. He took us around his place and showed us how the system works.
Kakdah and myself  had discussed weeks ago about having a similar plant house in a section of the garden enough to house 100 bags for a different gardening adventure. It is going to be fun and who knows, something else will develop later... Anuar paid us a visit in the evening. Within a week, we are going to have a new playing ground with vegetable gardening..... just wait.
Bangchik and Kakdah
meninjau sistem fertigasi di Gelong Gajah
Tanah Merah, Kelantan
at 1/08/2011

Email ThisBlogThis!Share to TwitterShare to FacebookShare to Pinterest
Labels: fertigation