It must have been ages since I last wrote about Bunga Bakawali, a cactus like plant , a giveaway by Rosiah my younger sister from Pantai Remis. My brother Azman can narrate stories about bunga bakawali at length, mentioning about the heavenly fragrance and the peculiarity that bakawali will open at midnite, and fall off soon after. It looks like Bunga Bakawali is not really meant for us earthly folks because we live in a cyclic 24 hour rhythm and sleep at night. A short burst of midnite flowering frenzy is definitely out of this world, and out of our normal waking hours.... No wonder Bakawali has fairytales around its heavenly existence.
We had this  Bunga Bakawali. since April, almost 9 months long. While we were doing the daily chores together at the porch, picking up dead leaves, adding fertilisers and so on, I noticed something different at the edge of bakawali leaf. It didn't look like a new shoot because the colour wasn't green! It is a BUD! So finally the heavenly flower is ready to open here.....
Earlier on 3.1.2011 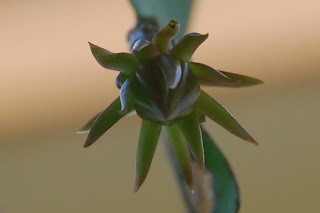 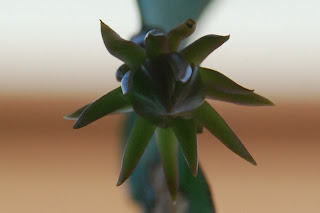 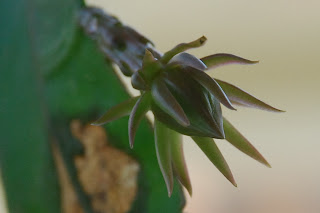 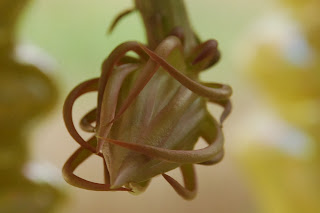 bakawali bud getting bigger, very pinkish colour
and  the whole flower bud is well protected by calyx or sepals
which look like tentacles of a squid.
11.1.2011 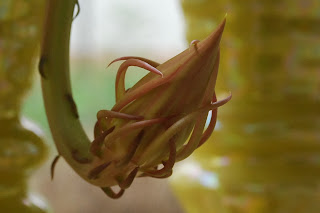 Another interesting feature, the colour of Bakawali stalk is getting very much lighter. It must be an enormous effort to bend at the base of the bud, preparing for the night of bloom. I guess the flower will open to be viewed horizontally in that position.
11.1.2011

The day it decided to open 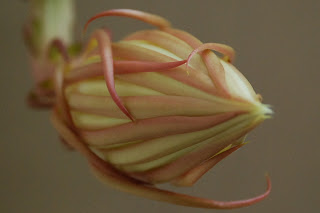 The colour, the size of the bud,  and the tip of the bud is really giving every indication that it is going to bloom that night
12.1.2011
7.45am


I took so many pictures during the blooming stage that I thought it would be best to put them in some meaningful sequence for everyone to see. Stay tune.., the pictures will be posted tomorrow.
bangchik and kakdah
menyaksi bunga bakawali dengan mata sendiri
Tanah Merah, Kelantan

(  Bunga Bakawali in Malaysia, Wijaya Kusuma in indonesia, Queen of the night, Night-blooming Cereus, Dutchman's Pipe, Gul-e-Bakavali  in Hindi, Kadupul in Sinhala. Bunga Bakawali is in fact a cactus. ~ Epiphyllum )
at 1/16/2011