Zinnia and the cage 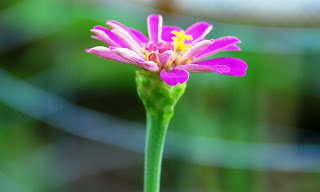 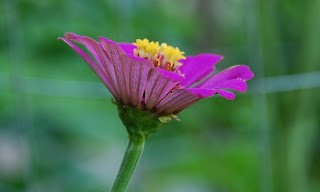 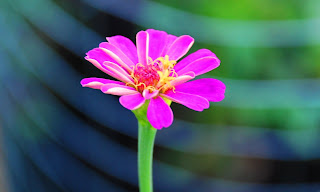 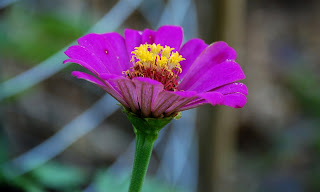 There is one plant at the side of the caged tomato.  Flowers are at various stage, and for a change, I pick  cage as the background for Zinnia.


a little bit   about Zinnia
For decades, zinnias have been the flowering annual of choice for spreading glorious colors throughout the garden as well as for cutting to bring indoors. But it wasn't always so. When the Spanish first saw zinnia species in Mexico, they thought the flower was so unattractive they named it mal de ojos, or "sickness of the eye!" What changes have been brought about over the years since--in flower colors and shapes, plant sizes, and disease resistance.
Even after seeds of zinnias were sent back to Europe in the 18th century, the plants were not much to look at. Named for Dr. Johann Gottfried Zinn, who wrote the first description of the flower, the genus Zinnia had to wait for the late 19th century to become more successful as a garden annual. Breeding by selection occurred in Germany, Holland, and Italy: 'Pumila Mixed' (precursors of the "cut-and-come-again" zinnias) and two selections from that strain, 'Mammoth' and 'Striata', were brought to this country and enjoyed great success with gardeners. But the start of the zinnia's real popularity began around 1920 when Bodger Seeds Ltd. introduced the dahlia-flowered 'Giant Dahlia'.
bangchik
at 6/01/2010

Email ThisBlogThis!Share to TwitterShare to FacebookShare to Pinterest
Labels: zinnia